Unlocked after beating ??? map (The last map in Crossed Worlds)

(only in arsenal/in gameplay it no longer has area damage)

The _0xBadc0de# is a Heavy weapon introduced in the 10.0.0 update of Pixel Gun 3D. It can be obtained by completing the last campaign mission (???) in Crossed Worlds. It was removed from multiplayer in the 16.5.0 update.

It is a mainly yellow, green, blue, and orange code-themed gun that shoots coded numbers. It consists of low efficiency, a good fire rate, good capacity, and above-average mobility. It was also good for rocket jumping,

It seems similar to the Alien Gun, except having a longer barrel and being entirely black with a yellow frame. The barrel has three light blue rings on it. When it fires, it creates a small green orb that will eventually explode and create small area damage. Upon hit, there is a sound like glass shattering and random green numbers burst out from it as it explodes on a surface, vanishing a moment later.

This weapon shoots coded numbers with slow travel time. Although, despite it being a gun, its main purpose is not attacking opponents, but advantageous rocket jumping. The player can easily rocket jump with this weapon by aiming at the ground, then shooting. They wouldn't have to worry about taking damage because the player doesn't take self-damage.

When reloading, the player takes out the clip and replaces it with another one.

It has Fixed Delay. This means that once the player switches from any weapon to this weapon, the _0xbadc0de# will always have a pull-up delay lasting around half of a second.

As it was removed from multiplayer, there is no need to worry about opponents using this weapon.

Due to the low efficiency and close-medium range, it is recommended to have a Sniper to keep you safe from long-range duels. An efficient Primary weapon, that can be used in all ranges (e.g. Hellraiser) is recommended as well. 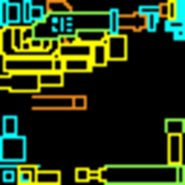 Extracted model of the 0xbadc0de.