The Adamant Revolver is a Backup weapon introduced in the 13.2.0 update.

It is an adamant-themed revolver that shoots regular bullets. It has high damage, decently high rate of fire, low capacity, and high mobility.

It is a reskinned version of the Steam Revolver with Adamant Armor/Adamant trophy-style colors.

It has a golden grip, crystal trigger guard, 3 crystal razor blades along the underside of the green barrel. It also has a magenta cylinder and a golden 4x scope. Almost the entire body is made of Adamant colors which are mostly green, magenta, cyan, and gold.

It shoots regular bullets that have instant bullet travel time. It performs best at close to medium range, but the scope does allow longer ranged battles.

When reloading, the cylinder is taken out and the player replaces the used bullets with usable bullets then spins the cylinder back to its original form. It has no delay mechanics.

Have a Sniper equipped when using this gun. Also have a rifle equipped to do the heavy damage at longer ranges. 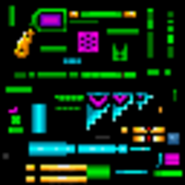 An extracted model of the Adamant Revolver.
Community content is available under CC-BY-SA unless otherwise noted.
Advertisement