Can be obtained through:

The Ancient Scroll is a Special weapon introduced in the 17.2.0 update. It is obtained from the Pi Dynasty Armory Lottery along with other weapons.

It is a scroll that shoots a magic laser with the Gadget Blocker and the Reload Damage attributes. It has good damage, a high fire rate, decent capacity, and low mobility.

It appears to be a semi-stereotypical medieval scroll. Hence the name, Ancient Scroll. It has a purple and hot-pink design and a black gem in the middle of the roller. The roller is gold with hints of purple. The paper has a purple stripe on either side, one pixel away from the edge. The paper also has (presumably) an eye in the middle. The bottom of the paper seems to be slightly dilapidated. The middle of the roller has a gem that represents (presumably) a face/emoticon.

When shooting, the scroll will be on the left hand side of the screen and an orb on the other hand. The orb will shoot a purple laser.

When reloading, like the Ouroboros, it will deal area damage and instead of orange, will make a blueish purple tint. Also when reloading, the orb on the right hand side will go into the eye in the scroll. Then come out again. It has no delay mechanics.

Have a high mobility melee weapon , like the Dark Force Saber or Double Cashback. Have a good weapon for finishing off people like Ritual Revolvers. Bring a good sniper rifle for long ranges, because it can be hard to use Ancient Scroll for long distances. Use the powerful shotgun for close ranges. 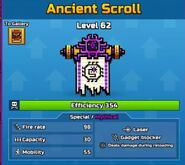 The Ancient Scroll in the Armory.