The Anti-Champion Rifle, commonly abbreviated as the Anti-Champ or the ACR by its initials, is a Sniper weapon introduced in the 13.2.0 update.

It is a champion-themed sniper rifle that possesses a 10x scope. It fires a red beam that can penetrate walls. Being a reskin of the Anti-Hero Rifle, it usually can 1 shot kill at any range when upgraded to maximum efficiency. Additionally, has a low firing rate of 60, an average capacity of 6, and a decent-low mobility of 65.

It is a reskinned version of the Anti-Hero Rifle with Champion-style colors having a red crystal replacing the green one in its Legendary counterpart. It also has a black and white magazine with a red cell in it, and four black cords connecting the gun to the crystal. It posses the same colors as the other champion weapons. These include the Champion Peacemaker, Champion Mercenary, Champion Electric Arc, and the Champion Solar Cannon.

The weapon has a two-handed grip. When shooting, it will emit a red laser beam with instant bullet travel time that deals extremely high amounts of damage. It has a low fire rate, followed by six laser beams per magazine. Upon spawning, it has initial two extra magazines. The laser beam can also go through walls and players, but as it pierces through obstacles, its damage diminishes. It also has a 10x scope, which can be useful for sniping at long ranges.

When reloading, the magazine that is located at the bottom of the gun were is taken out and replaced with a fresh one. The front of the gun (The crystal) shrinks in length.

It has both Input Delay (Receives other weapons' holster speed delay to this weapon) and Output Delay (Delays other weapons' holster speed). This means when once the Anti-Champion rifle is shot, it will take time to fire a selected weapon other than it. The Output delay on the other hand delays the Anti-Champion Rifle's (or any weapons in this manner) initial shot when brandished out of holster.

Purchasing it from the armory for 500

if you reach to level 45

. However, for unconfirmed reasons, this weapon, along with the other Champion-themed weapons, were removed from the Armory, but then they are brought back again as of the between the 15.9.0 and the 2.1.1.0 update.

This weapon is undoubtedly one of the most popular weapons in the game. When accessible to many players (like in the Armory or in the Trader's Van at a cost that many players can afford), many players would wish to buy it. It is often loved and wanted by many players, but others dislike it due to its performance being overpowered, and/or the number of times being used, and/or its popularity. Players who don't like this weapon requested the developers to remove this weapon from the Armory, and they successfully did so, making it only available in the Trader's Van for some time. However, as of the 2.1.1.0 update, they returned it in the Armory for 500

, making it available to be purchased again.

Some of veteran players originally used the Prototype, as it is the first sniper to have a similar performance of being able to shoot lasers that go through walls. When 10.3.0 came out, players started using the Anti-Hero Rifle, which has a similar performance to the Prototype. During the 13.2.0 update, people started using this weapon mainly because they assumed the champion reskin would be stronger. In reality however, it didn't have a large margin until many of the snipers became 2 shots, such as the Prototype and the Anti-Hero Rifle.

The weapon's name derives from the name of the original form of this weapon, the Anti-Hero Rifle. "Anti-Hero" indicates kryptonite in this context and "rifle" indicates that it is a sniper rifle. Given that this weapon is champion-themed and the crystal is red instead of green, it indicates that it is rather kryptonite for the Pixel Gun 3D "champions", therefore, which is why the name is "Anti-Champion Rifle".

The weapon in use. It was being used to shoot a Walking Bear.

The 10x scope of the Anti-Champion Rifle.

The Anti-Champion Rifle in the Armory. 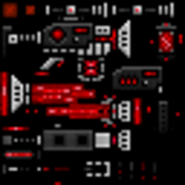 Extracted model of the ACR.