This article describes a Pixel Gun 3D weapon. If you are looking for the same weapon in Pixel Gun World, see Anti-Gravity Blaster (PGW).

The Anti-Gravity Blaster is a Heavy weapon added in the 5.4.1 update.

The Anti-Gravity Blaster is a silver-colored pistol that shoots energy projectiles. It is most commonly used to rocket jump. The damage is pretty high, the capacity is low and it has decent mobility.

It has a gray/white base with a red barrel and a black handle. Orange light can be seen coming out of the barrel.

On its body, it has displays of the weapon's status, which depict it as being overcharged due to the orange displays and lights. A battery clip is found on the gun's rear end.

When fired, it fires a circular mass of orange waves of energy.

When reloading, the used energy cell from behind the blaster is replaced with a new one.

This weapon shoots orange circular projectiles from its large nozzle with a harmless rocket-jump property. The weapon has a large blast radius compared to most other explosive guns. Its knockback effect is also useful for disorienting foes.

When reloading, the player takes out the energy cell from the back and replaces it with another one. It has no delay mechanics.

Have a strong Melee weapon and a strong Primary weapon equipped to fend off close quarter players. This weapon's projectile travels slowly, making it less effective at range. Have a good Sniper weapon, such as the Prototype or the Anti-Hero Rifle for these distances.

An advertisement promoting the Anti-Gravity Blaster.

The original Anti-Gravity Blaster in use.

A player holding it in the menu. 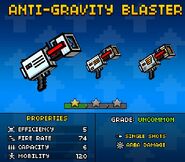