This article describes a Pixel Gun 3D weapon. If you are looking for the same weap on in Pixel Gun World, see Anti-Hero Rifle (PGW).

The Anti-Hero Rifle is a Sniper weapon introduced in the 10.3.0 update. It is commonly abbreviated as AHR by its initials.

It is a superhero/kryptonite-themed sniper weapon that possesses a 10x scope. It shoots a green laser beam that can wall-break. It has high damage for a legendary,a low firing rate, average capacity, and low mobility.It is a 2 shot bodyshot and a 1 shot headshot.

This weapon is a large sniper rifle with dark gray/black as the main color on the body. Some details of the weapon are purple (magazine) and green. There's also a big green crystal embedded in the gun. This material is probably Kryptonite, leading to a Superman reference which is why it was named “Anti Hero Rifle”.

When shooting, the gun, which is held with both of the player's hands, would emit a green laser beam with instant bullet travel time that deals high damage. It emits, at a low fire rate, six laser beams per magazine, and while spawning, two extra magazines are given. This laser beam can also go through walls and players, but the more walls it goes through, the lower the damage. It also has a 10x scope, which can be used for sniping in a long range and a large hitbox.

When reloading, the clip that is located on the bottom of the gun would be taken out and put back.

This weapon is undoubtedly one of the most popular weapons in the game. When accessible to many players (like in the Armory at a cost that many players can afford), many players would want to buy it. It is often loved and wanted by many players, but others dislike it due to its performance and/or its popularity.

Some of the very old players originally used the Prototype because that is the first sniper to have a similar performance of being a sniper that shoots a laser that goes through walls. Then, when 10.3.0 came out, players started using this weapon, which has a similar performance to the Prototype. Then, when 13.2.0 came out, people started using the Anti-Champion Rifle, mainly because they assumed the champion reskin would be stronger. 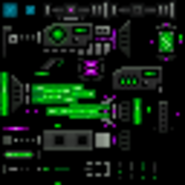 An extracted model of the AHR.
Community content is available under CC-BY-SA unless otherwise noted.
Advertisement