Are you looking for the following counterparts: the multiplayer-usable Combat Rifle or the unobtainable Desert Fighter?

The Army Rifle is a Primary weapon exclusive to the Campaign and Deadly Games modes, but not on general multiplayer and Arena. The only way to acquire this weapon in the campaign is to beat the Bridge level.

It is a military-themed assault rifle that shoots bullets like any other machine gun. It has good damage, high rate of fire, decent capacity and average weight. It is one of the most powerful weapons in Deadly Games.

It is variant of the Combat Rifle and the (unobtainable) Desert Fighter with forest camouflage. There is a little blackish underbarrel grenade launcher below the barrel taking place of the Combat Rifle's bayonet, but it is not functional.

The Rifle shoots 40 rounds at a high fire rate with hitscan properties. The accuracy slightly decreases when spraying and praying. It has a 3x scope attached to this weapon to allow longer-ranged battles.

When reloading, the magazine is taken out and is replaced by a spare one. It has no delay mechanics.

Equip a reliable short-range weapon along with this one, to pick off any melee users.

The Army Rifle in use. 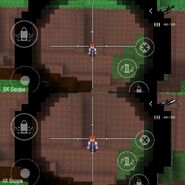 A comparison between the Army Rifle's 3x Scope and the Combat Rifle's 4x scope. 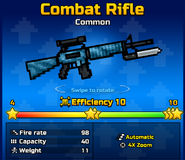