The Barrier Rifle is a Special weapon introduced in the 10.6.0 update.

It is a futuristic-themed rifle that shoots blue disks and protects the player with a barrier shield. It has moderate damage, fairly high rate of fire, decent capacity, and decent mobility.

It's a minigun-shaped weapon, and it has a light-brownish, metal and yellow scheme. It has the blue tube as the 'accelerator' and the clip is simply a blue battery. A rotating, thin disk that looks like a halo is on the gun's body.

This weapon shoots blue disks with a certain bullet travel time and these disks can pierce through players. One of the unique abilities for this weapon is the existence of the barrier, which protects the player from ricochet weapons like the Laser Bouncer and the Alien Bouncer.

When reloading, the clip from the back of the weapon is taken out and is replaced by another. It has no delay mechanics.

Have a long ranged weapon. 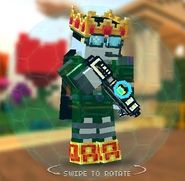 A player protected by the weapon's energy shield.