The Beast is a cosmetic hat that can be used on any game mode.

It is used for aesthetic and decoration purposes only. It doesn't give any buffs.

This hat resembles its projectile counterpart from the B.E.A.S.T. weapon. It is a small, short green monster that resembles an alien. The monster has small, stubby legs and two orange eyes on the side of its head. It has a large mouth on the front of its face. 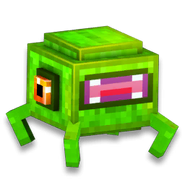