This article describes a Pixel Gun 3D weapon. If you are looking for the same weapon in Pixel Gun World, see Big Buddy (PGW).

The Big Buddy is a weapon introduced in the 6.0.5. update. It is located in the Heavy section of the Armory. It was removed in 10.1.0 and can only be obtained from special event chests or the Trader's Van.

It is a large, black, handheld cannon with a sparkly fuse and a wooden mount on the bottom. It also looks like it has a mushroom or face that is black with a yellow and red outline. It has insane damage, a very slow fire rate, mediocre capacity, and low mobility.

This weapon is an enormous and cumbersome cannon. Adorned on the side is a black smiley face with a yellow and red ring surrounding it, resembling an explosion. There is a small lit fuse on the top. At the bottom of the cannon, there is an unusable wooden base with 4 small wheels attached.

This cannon shoots a large, black cannonball with a fast, but not instant bullet travel time. On impact, it leaves a large explosion. After every shot, the player touches the fuse.

When reloading, the player puts three cannonballs into the cannon. It has no delay mechanics.

Since the Big Buddy can hold only 3 cannonballs in the weapon itself and every time the player fires the Big Buddy the fuse has to be re-lit, the Big Buddy is better for players with lower grade armor. If you happen to encounter a player with higher grade armor, use that to your advantage by firing at the ground when they land if they are jumping around, causing the opponent to take major explosion damage if done correctly.

This weapon is undoubtedly one of the most popular weapons in the game. It was one of the OG weapons, as it was released in 6.0.5. It was very powerful during its release, as there were few heavies that could compete with its power(one that could was the Anti-Gravity Blaster). It’s popularity has dimmed down in modern times, but still remains true as a PG3D classic. Players with this weapon often equip a highly mobile weapon, which heavily improves their strategy with the use of this weapon. Many players were disappointed when this weapon got removed from the game, but when the Trader's Van was released, this weapon eventually popped up in the van one day and made the players happy. When the new trophy system was introduced, many players who didn't get this weapon can finally obtain it from the trophy system if they earned enough tags. 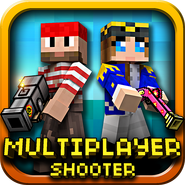 The Big Buddy in an old PG3D logo.

The Big Buddy in the old Armory.

The Big Buddy in use.