The Biotic Shield is a Throwing gadget introduced in the 17.5.0 update. It requires one's clan to reach Golden Division to unlock.

It is a golden device worn on the right side of the player's head that has a blue wire, a red wire, and a black antenna with a red highlight attached at various points. It also has a gem embedded on the side.

When activated, the blue cross in front will shoot out a blue ball of energy that expands into a blue sphere-shaped shield that can absorb any damage inflicted by enemies, protecting yourself and your allies. It has the

attributes. The shield lasts for a period of time and can the duration can be increased by upgrading. Moreover, after each use, players must wait a 50-39 second cooldown before he/she can use it again. 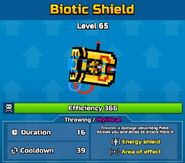 Biotic Shield's stats if you click two times on it. 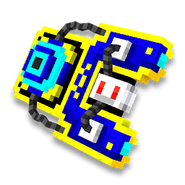