Campaign is a singleplayer mode in Pixel Gun 3D. The protagonist is Newbie, a farmer who wakes up during a zombie apocalypse and strives to find the source of the incident.

Note: Rewards from Campaign levels (not counting last levels) will only be given if the user has three stars. Players can't earn hidden coins and hidden gems in Offline Mode either. However, players may still advance through levels they haven't completed yet in offline mode. 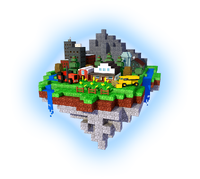 The old labels of the stages in Pixelated World.

Pixelated World is the first world and contains 9 stages. All the levels are situated in rather ordinary places with the exception of Area 52. All of them appear to be zombified or infected. This world has an overall creepier atmosphere compared to other worlds. The 9 stages are: 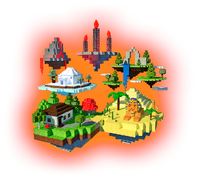 Block World is the second world and contains 6 stages. It appears to be a different realm inspired by fantasy. Also, it appears to be based on the world of Minecraft. The 6 stages are: 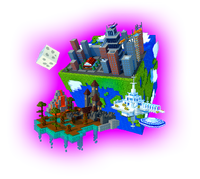 Crossed Worlds was released on the 20th of June 2015 as part of the 10.0.0 update. It features the hero, the girl, and the Dragon. When a player completes the last level of this world, they will get a free gun (the 0xBadc0de) as a reward, as well as 15 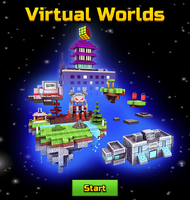 Virtual Worlds, currently the most anticipated world to date, was released on February 26th, 2019 as part of the 16.0.0 update. It picks off from the events of the previous world. When the player completes the world, they will receive the Cubic Hat as a reward. It contains 6 stages. Take caution this is more difficult than the previous worlds and requires all previously completed levels to have three stars.

At 4:15 AM in San Blockcisco, a survivor is woken up by a horde of zombies. One was digging, while the others were scratching on his wall, aware of his presence. He grabs a gun and defeats them all. He then hears a cry for help followed by some bells tolling in a nearby church. He rushes to help, but has to defeat another horde of monsters. He was unable to save the person in time. He finds a zombie evacuation plan lying next to the person he tried to save. He suggests to himself that he should go to the City, so he goes outside of the cemetery and finds a police car.

He then drives off to the city. He defeats another horde of monsters but finds a hospital entry card on the boss. He then goes to the Hospital, searching for answers, only to realize that it was a terrible mistake, since there were zombified patients inside.

Shutting the hospital doors on many zombie arms, he spots a helicopter. He runs after it, trying to alert the pilot to help him. However the helicopter flies over the Bridge. The survivor then pursues the helicopter into the bridge, only to find that the bridge has been split in two parts. He looks down and sees that the helicopter has crashed into an offshore prison. With another horde of monsters behind him, he is forced to jump and swims to the prison.

After defeating yet another horde of zombified prisoners and policemen, The survivor manages to get to the roof of the prison only to find that the helicopter pilot is dead. However, he did find a letter labeled "Top Secret." He opens it and finds a map showing how to get to Area 52 through the Forest.

He then starts walking to the forest, remembering how much he liked it as a child, hoping it's still safe. After surviving a horrible night with monsters, such as the Slenderman, in the forests, he arrives at the gates of Area 52 and finds a way in.

He remembers his home before it was ruined. He angrily jumps through the portal saying that he will have his revenge and will destroy the source of the monsters.

After he jumps through, he lands in a Village and hears a girl crying for help. He rushes to the scene to find that an Evil Chicken Man is attacking her.

After defeating another horde of monsters, along with the chicken man, the male survivor is told by the Female Survivor that it was her who went through the portal and awakened the dragon (the source of the monsters), unleashing the plague of monsters on the world.

She offers to help and tells the male survivor she knows where the portal is. They then pass through the Desert, defeating a horde of mummified monsters, and continue on their journey to find the portal to the dragon. They then go the Sky Islands in search of a place to rest.

As they arrive the female survivor remembers how she ran through the sky islands. The male survivor ironically says that it's completely safe, as he is confronted by a Flying Pig with an evil smile on its face. After defeating the flying pigs, he cooks one for dinner.

The next day the female survivor starts having fun jumping around on the floating lands. They then arrive at the Winter Island, where the male survivor notices that a snow man is twitching. It transforms into a Double-Headed Snowman and initiates an ambush.

After defeating it and the rest of the enemies, it is shown that both survivors have redecorated the snowman, making it "look better". They then ride on a floating ice sheet to the Hell Castle.

Once they arrive, the girl says she saw many scary shadows. After defeating the monsters, they jump into the portal to the Parallel World. There, they have to face another horde of monsters and the Dragon.

The dragon, weary from defeat, apologizes and says he'll chase the monsters from the Pixelated World. However, he volunteers in facing a bigger problem: "Why everything is square?". And they flew off the island in trying to solve the problem.

After several hours of flight to the Swamp, they land on the island. Newbie and the Female Survivor pass the barrier, but the Dragon can't pass it as the dragon says that "the barrier is made for the creatures of this world".

After talking, they walk by some trees and they encounter monsters up ahead. The Newbie then defeats a swarm of swamp creatures, including the Spider Boss.

After the fight with the Wizard Boss and guards of the castle, Newbie asks why things became cubical. The wizard responds that "There is an ugly monster turned our world into this cubical mess". Then, the wizard tricks them by claiming to make a portal leading home, but instead it goes to the Space Station.

They discover the Space Station is occupied by aliens, leading to another fight. Newbie defeats all of the aliens on the station, including the Alien Professor.

They put on spacesuits before taking a ride on an Alien Spaceship and re-entering the atmosphere. They land on top of a building in the Megalopolis. A military force thinks that the ship is piloted by aliens that are trying to invade their planet.

After Newbie takes out the soldiers and their unique boss, the Military Mech, they take the Jetpacks lying on top of a building and use it to fly towards The Creator's home.

The Creator revealed himself to the survivors and said that a creature called The Bug was made from an unrecoverable error in the game code, and it started to change both of the game and the world. Then, the Creator assigns Newbie to 'fix' the bug with a pair of virtual reality headset and a controller. Newbie then ventures into the Virtual World, the location of The Bug.

He soon defeats the gang of code monsters, including The Bug. In anger, The Bug zaps Newbie to become trapped in the virtual world, where he would become the "new bug". He finds himself in the "Internet".

After drifting away in the Internet. The Newbie is picked up from a crane arm leading to a ship. The captain of the ship welcomes the Newbie until they were interrupted by an attacking group of droids.

The Newbie defends the ship from the attackers until every drone is destroyed. The captain then reveals that an entity by the name of Cubic has trapped many people inside this dimension. Cubic forces people to play in a variety of mind games. The captain then plots with Newbie that they will start a revolution to free everyone from Cubic's rule, but they will need help from the Champions. The Newbie is then sent to retrieve the first champion in Cubota 2. However, the champion is currently engaged in battle, to which the Newbie must defeat him to have him listen.

The Newbie, after defeating him, retrieves the Cubota 2 Champion and escorts him back to the ship. The Spaceship Captain then orders the Newbie to retrieve the next champion; the Teleportal Champion. The champion, however has lost any control over his senses due to his ambitions to find C.A.K.E. The Newbie is then attacked by numerous robotic defenses, to which C.A.K.E finally reveals itself and attacks the Newbie, but fails.

After defeating C.A.K.E and recruiting the Teleportal Champion, Newbie then meets the final champion by completing the parkour course. The Newbie manages to convince him to join in the Newbie's revolution.

With all the champions recruited, the Newbie goes to Cubic's citadel to stop it once and for all. However, the Admin, who takes the form of the Newbie, begins cloning itself to stop the Newbie and the champions.

The Newbie and the champions defeat the Admin and all of its clones, leaving only Cubic left. The Teleportal Champion opens a portal to Cubic, in which the Newbie enters to stop Cubic.

The Newbie then defeats all of Cubic's minions and Cubic itself, however, the Newbie then realizes that the entire experience was a game called "Cubic Revolution". Confused, he tries to figure out what is going on until he is teleported back to where he was floating back to the Internet. The events of this world begin to repeat, in which the Newbie realizes that he's trapped inside a game and must escape.