, obtained from the Lucky Chest.

The Candy Baton is a Melee weapon introduced in the 10.2.0 update of Pixel Gun 3D. It was only obtainable as a rare prize from the Lucky Chest, but now, it requires 250 parts to craft.

It is a large candy cane that hits the player in melee range when swung. It deals good damage, high attack rate, and great mobility.

The Candy Baton is an enlarged candy cane adorned with red and white stripes.

The player, holding it in one hand, swings this weapon when attacking. It can only deal damage in very close range, since it is a melee weapon.

Equip a weapon that will be good in either a long or medium range, for it is a melee.

Efficiency was nerfed and it was removed from the Lucky Chest.

It was brought back into the Lucky Chest.

This weapon was also obtainable from the Trader's Van for a limited time on the 11th of January, 2020. 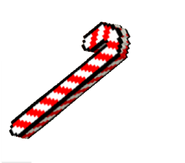 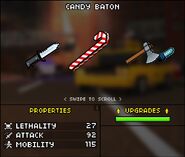