The Cape Editor in the Armory.

The Cape Editor, formerly called the "My Cape", is a cape available in the "Accessories" section of the Armory. As the name implies, the player can customize the appearance of the cape.

Before purchasing, or if left unedited, it looks like a red cape with a black 'X' and a blue crystal in the middle.

☆: When equipped, it adds slight improvements to the player. The stats being:

The player can edit their own cape into any style they want. Upon purchase, it is a red cape that has a bluish-green crystal in the center. 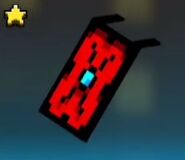 The default appearance of the Custom Cape. 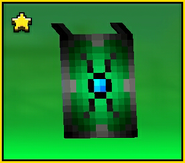 An example of a customized cape.

Another example of a customized cape.

The Cape Editor in the old editing screen.