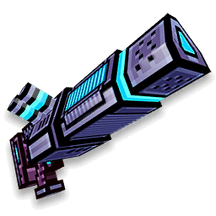 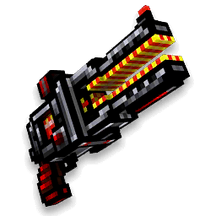 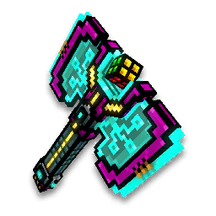 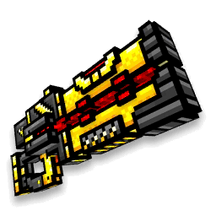 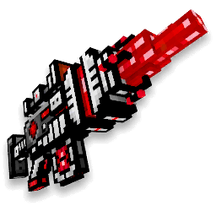 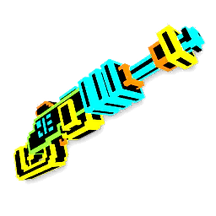 Weapons are game content that exist in both Pixel Gun 3D and Pixel Gun World. These items can be obtained through:

There are currently 6 types of weapon categories in Pixel Gun 3D:

All of the Modes in both Pixel Gun games, and some Minigames in Pixel Gun 3D permit the use of weapons. There are exactly 63 weapons that exist in both games.

Weapons in both games are generally used to eliminate players and thereafter win matches. Weapons in each category may act differently. For example, Primary weapons could deal low damage per bullet but have a high fire rate, and Sniper or Heavy weapons could deal high damage, but with a low fire rate. Melee weapons (with the exception of the Disconnector), Flamethrowers, or Electro-Throwers do not shoot bullets/projectiles. Instead, they attack at close range.

Once a player taps/clicks on the fire button, bullet(s) gets fired. Weapons can retain ammunition if a player picks up ammunition packs often. If a bullet hits another player, that player will take damage, or could possibly die if that player was either low on health, or the weapon is just efficient enough to take out a player in one hit.

Whether the weapon is fully automatic in real life or not, you can continuously fire any weapon by simply holding down the fire button. However, this would decrease accuracy and greatly use up ammunition. Weapons have recoil and bullet travel time, so mind these attributes to increase accuracy.

In Pixel Gun 3D, there are exactly 63 weapons that are in both PG games and about 300+ weapons exclusive to the game, adding up to around 363+ weapons in total.

You can obtain weapons from:

Other weapons are part weapons, where the player needs to get a certain amount of parts in order to obtain a weapon which needs parts. You can also earn parts from:

You can upgrade weapons with Coins or Gems. Coins upgrade weapons by one level while Gems upgrade weapons to the max level of the player. Every time the player levels up, weapons get increasingly more expensive to upgrade. The price of Coin upgrades increase much more frequently because of its availability as opposed to Gems which only scale at certain levels.

In Pixel Gun World, there are exactly 63 weapons that are in both PG games and 26 weapons exclusive to the game, making a total of 89 weapons.

You can also obtain weapons from The Armory, an armory similar to the one of PG3D.

Unlike in Pixel Gun 3D, there are Up3s (Third Upgrade) for some weapons, specifically, the simple weapons like the Hunger Bow and the Old Revolver. However, upgrading isn't common in Pixel Gun World.

This category lists all of the Weapons in this wiki.