The Cemetery is the second map in the Pixelated World Campaign. It takes place in a cemetery with gravestones, monsters, a church, and a hedge maze.

It has a graveyard, a church, and a hedge maze. It also has two hidden gazebos found on each far corners. The settings takes place at midnight, with white clouds in the background. A gravel pathway surrounds the church and makes its way to the hedge maze and grave stones surrounds the area. Other than the round green trees, there is also the occasional buss and patch of grass.

Newbie defeats the Police Double Headed Zombie and grabs its gun. After picking up the weapon, he hears a scream for help and a bell from a church, before running to try and save the other survivor.

The coin is inside the chapel behind the shrine in the front.

In the hedge maze, there is a hidden gazebo in the far left. Don't mix it up with the other gazebo. This is a hidden Gem in the pre-Campaign updates.

The story comic for Cemetery.

The grass maze (taken from the left side)

The person Newbie failed to save.

The indoors of the church.

The back of the church.

The second gazebo (located in the right corner of the grassy maze). 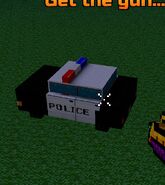 A police car, which can be found in the map's exterior.