The Christmas Sword is a Melee weapon introduced in the 4.4.0 update.

It is a simple Christmas tree that is used as a sword in melee battles. It has a medium attack speed and a decent mobility.

It resembles a pine tree with a yellow star on top. The trunk of the tree is used as a short handle. It is basically a Christmas tree but lacking most of the ornaments, except for the star.

It is a melee weapon, so damage to the opponent is only affected in very close range. The user swings the sword to hit the opponent and it makes a bell sound when it is swung.

Have a long range weapon to attack people with when they are out of reach.

It was removed from the armory.

It was temporarily brought back into the game.

It was brought back temporarily for 105 gems.

It was added in the Lottery chests.

One of the characters wielding a Christmas Sword.

The Christmas Sword in the old Armory. 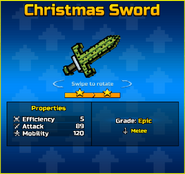