The Clan Fort(s) is a feature added in the 13.1.0 update where clans protect their fort from sieging clans, who are trying to loot their fort. For more info on Siege, see Siege.

As of version 17.0.0 this has been renamed as Escort. Players may no longer create forts within the Clan Fort Editor (Clans 1.0). Players and anyone in the Escort player lobby (previously known as Siege) will be randomly assigned a predesigned template fort and both teams will fight using the same Fort design.Other clans fort and tank power are now shown properly.

At the base of this feature, clans need a simple fort to defend. Forts can be fortified with an array of defences such as sniper towers and machine gun turrets.

There are ground-based hazards, such as mines, bear traps, and webs. There are also monsters that can defend the base. The objective is to kill the attackers so they will not successfully destroy the base. It is you can only choose a certain amount of defences per fort.

When on a tank escort, the objective for the attacking team is to push the tank to the base in time. The attackers can use their weapons to kill players trying to stop them, or the tank can attack itself. The tanks can be customized and/or upgraded to go faster or deal more damage.

Before the 17.0.0 update, the Clan Storage stores parts for certain items. Moreover, once all parts are collected, it will be usable. Parts that are not collected will appear as "Not in storage". Players can see a small icon, the rarity and the description in the clan storage.

Fort power increases when earning Clan Silver in the Clan War to open chests. This would result in receiving parts in items and to set them in the Fort. Items can be upgraded to increase the Fort level. The energy bar depends on this upgrade and installing the same items spends more energy. 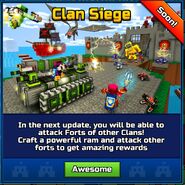 Announcement for the Siege mode. 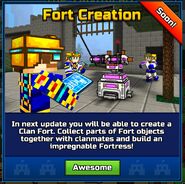 Announcement for the Clan Fort.
Community content is available under CC-BY-SA unless otherwise noted.
Advertisement