This article describes a Pixel Gun 3D weapon. If you're looking for the same weapon in Pixel Gun World, see Combat Knife (PGW).

The Combat Knife is the default melee weapon. This weapon is automatically given when the player first starts the game.

It is a simple knife that stabs the player in the melee range. It has low damage, moderate mobility, and fast attack speed.

It is a standard combat knife, with a black handle, two white dots, and a metal blade with a serrated edge. Its just that simple.

The player holds this knife in one hand by its dark gray handle. The player swings the knife when attacking, damaging players when a player comes near the user in melee-range.

Try to replace the combat knife as your melee as soon as possible, as it is very underpowered against armored players with decent weapons.

The giant replica in Checkmate.

Combat Knife in use 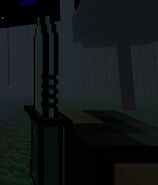 An older pose of the Combat Knife in use