This article describes a Pixel Gun 3D weapon. If you're looking for the same weapon in Pixel Gun World, see Combat Rifle (PGW).

Are you looking for the following counterparts: the Campaign and Deadly Games exclusive Army Rifle or the Desert Fighter?

The Combat Rifle is a Primary weapon introduced in the early updates of Pixel Gun 3D.

It is a military-themed assault rifle that shoots bullets like any other machine gun. It deals good damage, has a great fire rate, decent capacity, and under average mobility. It is currently 10-12 shots when maxed out.

It appears to be a remodel of the Army Rifle. This weapon is based on the real-life M16 with an added scope resembling an ACOG scope and equipped with an under-barrel bayonet. It has a snow camouflage with a blue tint.

The rifle shoots 35 regular bullets at a high fire rate with instant bullet travel time. The accuracy slightly decreases when hipfiring. It has a 4x scope attached to this weapon to allow longer-ranged battles

Although a bayonet is attached, it serves no functional purpose.

When reloading, the magazine is taken out, replaced by a spare one, and the bullet rechambers.. It has no delay mechanics.

Since the Combat Rifle (PG3D) is a Primary weapon, it uses primary modules, whether it is kinetic, magic, or energy, all of them increase the weapon's base damage the same way, except in Raids, where the modules needed depend on what module the enemies are weak to.

Bring an accurate weapon due to its rather high spread.

The old Combat Rifle in use. 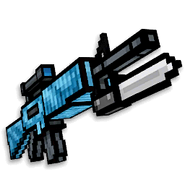