The Complete Grinder is a Melee weapon introduced in the 21.3.0 update, and can be obtained in the Mining Season Battle Pass.

It is a three-headed drill of the Legendary. The drills work similarly to chainsaws and will inflict

. It deals decent damage and is paired with a high mobility and high attack speed.

It has Fixed Delay. This means that once the player switches from any weapon to this weapon, the Complete Grinder will always have a pull-up delay lasting around half of a second.

The weapon features a large white body with three silver drill heads at the front. The drills are connected to the main system by yellow wires that can be activated by a trigger in the back. On top, there is a GPS system that will detect the positions of enemies.

. In addition, it has the ability to detect enemies due to its 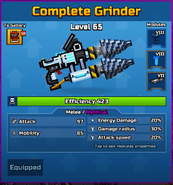 Being fired
Community content is available under CC-BY-SA unless otherwise noted.
Advertisement