Pixel Gun Wiki
Register
Don't have an account?
Sign In
Advertisement
in: Super Lottery, Weapons, For Sandbox,
and 10 more

The Cupid's Bow is a Sniper weapon introduced in the 10.1.0 update. It is a Valentine's Day-themed bow that shoots heart arrows. It has low damage, medium rate of fire, a mediocre capacity, and low mobility.

It is a bow with a few colors on it, and heart-shaped tips on each end of the bow. The arrow is mostly white with a pink heart at the tip. The arch is also mostly white pink and brown. The string is completely white.

This bow shoots a heart arrow that has area damage. The arrow has instant bullet travel time and has a blast radius of hearts. In Sandbox mode, when a player targets another player, the chat mode would say "PLAYER1 LOVES PLAYER2". Despite this weapon being in the sniper category, it has no scope that allows it to fight in long range.

It uses the single-shot system so it has no reload animation. It is an input-only weapon, so it will only gives delays to other delay weapons.

Since the Cupid's Bow is a sniper weapon, it uses primary modules, whether it is kinetic, magic, or energy, all of them increase the weapon's base damage the same way, except in Raids, where the modules needed depend on what module the enemies are weak to.

Due to the area damage, and the lack of a scope, it works well for a close-medium range weapon. Pair it with a shotgun or any other Primary/Backup weapon. 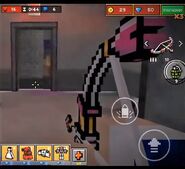 The Cupid's Bow in use.