This article describes a Pixel Gun 3D weapon. If you are looking for the same weapon in Pixel Gun World, see Dater Hater (PGW).

The Dater Hater is a Sniper weapon introduced in the 9.2.0 Valentine update and later added back in the 10.2.0 update.

It is a Valentine's day themed sniper that shoots flechettes in long range. It has high damage, medium fire rate, low capacity, and low mobility. It simply does not have any other attributes that an average sniper weapon has except for the silent effect.

It has a red/yellow base, a red and white handle with a red heart in the middle, a yellow stock with what seems to be a red pressurised gas canister. It also has 4 yellow barrels which house a pink-tipped flechette each.

It also includes a 10x scope. It also seems to be based on an arrow projectile weapon. When fired, a heart flashes in front of the barrel.

This sniper shoots flechettes with instant bullet travel time and when these flechettes are shot, hearts flash in front of the barrel. Despite having a long-range scope, this is also very effective in close-medium ranges as well.

When reloading, the flechettes on the front are taken out and are replaced by another spare group of flechettes. It has no delay mechanics.

Have a weapon that can be used in close range, in case of a close ranged engagement.

This weapon has been given an efficiency of 21 and a combat level of 10. 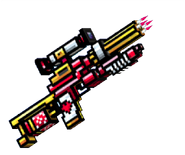