The Dead Star, formerly called the Death Star, is a community-made Backup weapon introduced in the 10.4.0 update made by a fan and player named Martin Duran.

It is a fantasy-themed pistol that shoots a purple particle. It deals high damage, decent rate of fire, low capacity, and average mobility.

It has black scales and metallic colors, its magazine is located in the within the gun (crystal-like object) and it has spines protrudes when it is loaded and retracts if in action or reloading and vice versa. It has a black star on its grip on the weapon.

This weapon shoots a purple particle with instant bullet travel time accompanied with a purple flakey area damage. The combination of both properties allow it to have a hitscan and have the ability to fight in long range.

When reloading, the purple gauge in the middle of the weapon is taken out from this weapon and is replaced by another one.

It has Fixed Delay. This means that once the player switches from any weapon to this weapon, the Dead Star will always have a pull-up delay lasting around half of a second.

Bring a scoped weapon to take out targets from afar. 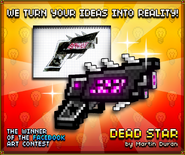 A picture to commemorate the first sketch of the Dead Star.