The Deadly Stings is a Backup weapon introduced in the 17.2.0 update. It is obtained from Pi Dynasty Armory from the Super Lottery.

It is a Chinese-themed projectile weapon that throws knife projectiles. They can poison and mark the target, as well as pierce through multiple players. It has good damage, a decent fire rate, low capacity, and decent mobility.

It appears to be a re-model of the Heartbreakers.

It takes the appearance of a shield with a Golden-brown detail with green pearls covered by small yellow circles. There is also a Ying-Yang symbol in the middle (except that the Yang is red) with a red circle on it. The daggers have green and yellow tips with the face of a demon and the handle is red with a small gold circle under.

The player holds a sharp knife that resembles that of the kunai and some sort of container or shield which holds more of the knives. When the knife is thrown, it leaves behind a trail of cryptic symbols.

This weapon uses the single-shots system so it has no reload animation.

It has Fixed Delay. This means that once the player switches from any weapon to this weapon, the Deadly Stings will always have a pull-up delay lasting around half of a second.

Equip a Primary with a high rate of fire to finish off your enemies. 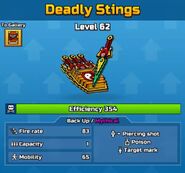 The Deadly Stings in the Armory.