It is a playing card that has a black background overlaid with a white oval and bright blue border. There is the "-1" integer on the top left corner and it is also on the bottom right corner, but upside down. The oval contains 4 pistols which resembles a backup weapon with different colors: red, blue, green, and yellow.

Considering its design, it is a remodel of the UNO card.

This Gadget is good for situations like when the player is in an intense duel or if they want to go to their spawn point without killing themselves, which results in a self-destruction penalty. When used, the player, when/if killed, will go to their respawn point and the opponent who killed them won't gain any points only in this kill.

However, in the kill console log, if the user is using this Gadget to get to spawn point without killing himself/herself, the death icon is shown as the committing suicide icon.

This gadget is also useful if being spawn trapped as it will make it so your opponent will not get any points from killing you. 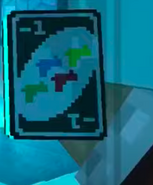 Denied when held in game (with effect).