This article describes a Pixel Gun 3D weapon. If you're looking for the same weapon in Pixel Gun World, see Desert Eagle (PGW).

The Desert Eagle, formerly the Black Python, is a Backup weapon that can be bought in the Armory.

It is a standard black pistol with green markings that shoots regular hitscan bullets. It has average damage, high rate of fire, low capacity, and slightly low mobility.

It is a standard, high-caliber pistol that is black with hints of green. It also features a red integral laser sight. In previous versions of the game, it’s first form was a golden pistol with a darker gold handle.

As of the 12.5.0 update, it looks identical to its final upgrade, like all weapons that are upgradable and had a different appearance for each upgrade.

This pistol, being held in the player's right hand, shoots out regular bullets with instant bullet travel time. This weapon's accuracy decreases when spraying and praying and it can be used best in close to medium range because of it's bullet spread and recoil. However, this weapon does possess a 2x zoom optic sight, which allows it to fight in a longer range.

When reloading, the player takes out the magazine and replaces it with another one, then triggers the bolt. It has no delay mechanics.

The old Desert Eagle in use.

The new Desert Eagle in use. 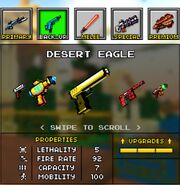 Desert Eagle in the old armory

Desert Eagle UP2 (now the base desert eagle)