It is a Sniper Event set-themed weapon that holds a few missiles per magazine and possesses a scope. It has a very slow fire rate, average capacity, low mobility, and will kill in 1-2 shots depending on module level .

It seems to have a somewhat similar design as the One Shot. However, it is not a complete reskin, as the former is a sniper rifle. It is mostly grey with some dark yellow and red accents, it has a dark grey scope with some yellow details and a white cross-shaped reticle. It has a red trigger and a white and red missile that sits on a belt in front of the weapon until it is shot.

The weapon is held similarly to the One Shot: from the bottom. It emits white missiles with a small, orange fire in the back with a fast bullet travel time. The missiles explode on impact which damages anything that gets within its area. It has a relatively high blast area even for a heavy. It also possesses a 4x scope.

When reloading, the magazine from the bottom is taken out and is replaced with a spare magazine. It has no delay mechanics. 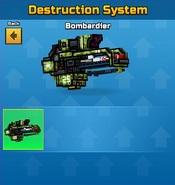 The Destruction System's skin, "Bombardier", introduced in the 16.4.0 update