16 (total shots the player starts with)

The Dragon Bite is a Sniper weapon introduced in the 17.2.0 update. It is obtained from the Pi Dynasty Armory Lottery.

It is an oriental-themed bow that has a charge shot ability. It deals devastatingly high damage for a sniper bow, a slow fire rate, a low capacity, and a high mobility of 75.

It seems to be a bow, resembling the Professional Bow, but with a Lunar New Year color scheme. This bow has six silver curved spikes on it that are symmetrical. It has a rather curvy shape in general, has six green symmetrical green detail. There are also golden details on the rest of the bow, aside from the arrow and the center of the bow. The bow has a red string and on the center is a red dragon face with three blue eyes. It also has a yellow arrow with a green sharp end and a red extremity. When fully charged, the tip lights on fire.

This weapon shoots an arrow that can be charged. The more it is charged, the more it deals damage. Moreover, this projectile, which is a yellow arrow with a green tip, has instant bullet travel time and area damage. This arrow can bounce through walls and deal more damage to cursed players.

It is a bow, so it uses the single-shot system, therefore, it has no reload animation.

Equip a close-ranged weapon and do not insert the Lenses module, since it is practically useless for this weapon. 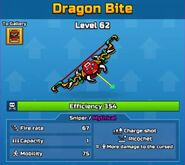 The Dragon Bite in the Armory.