1 (For getting access to tSmall Chest and King Chest)

The Eindringling is a Primary weapon that was introduced in version 6.3.1 as a part of the D-Day update along with the Brave Patriot.

It is a gray machine pistol that shoots regular bullets at a high fire rate. It has medium-high damage, high rate of fire, average capacity, and low mobility.

It is a silvery-white gun with a very long barrel and shoulder stock. The ammo clip is also very long. There is a cross near the middle, representing Germany. The cross was later replaced by a white eagle. Most of these parts are simple and slender. It is based on the real-life German MP40.

The player shoots regular bullets at a high fire rate and with instant bullet travel time. When reloading, the tall magazine from the weapon is taken out, a spare magazine is inserted and the bolt is triggered.

This weapon has no delay mechanics (fixed delay, delay input and delay output).

Since the Eindringling is a Primary weapon, it uses primary modules, whether it is kinetic, magic, or energy, all of them increase the weapon's base damage the same way, except in Raids, where the modules needed depend on what module the enemies are weak to.

Eindringling in use in older updates.

The old Eindringling : The eagle has been swapped with a box-like logo. This logo is the Balkenkreuz, a symbol used by the Heer, Luftwaffe, and Kriegsmarine.

Eindringling in use in newer updates. 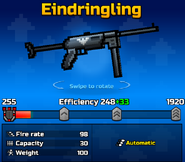 Eindringling in the old armory