This article describes a Pixel Gun 3D weapon. If you are looking for the same weapon in Pixel Gun World, see Fire Demon (PGW).

The Fire Demon is a Melee weapon in the Armory. Previously known as the Diablo, it was the upgrade of the old Fire Demon and the final version of the Skeleton Sword. However, both of those weapons were removed.

It is a fiery sword that attacks and burns the player in close range. It has high damage, great attack speed and has average mobility. Such is to be expected from a melee weapon.

It takes the shape of a standard sword, but the blade seems to be made up of fire. The crossguard has a demon face on it. The blade features a gradient of colors (red, orange, then yellow) much like a flame.

The player holds this sword from their right hand. When swinging, they attack and burn the opponent in close range, making them temporarily lose extra health.

It was re-added to the armory along with most of the other previous vaulted weapons.

The Fire Demon in use. 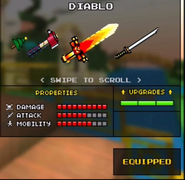 In the old Armory when it was called "Diablo". 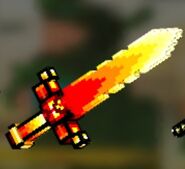 The Skeleton Sword in use.

The original Fire Demon within the 6.3.0 update’s icon.