89 (As displayed in the Armory)

The Grenadier is a Heavy weapon introduced in the 12.0.0 update.

It is a handheld grenade pistol that shoots grenades with a contact detonator attribute. It deals great damage, decent fire rate, low capacity, and average mobility.

It is a silver weapon with a large clip containing multiple tiny grenades. It also has a black handle, a tiny beige shoulder stock, a cyan and block iron sight, an under-construction tape and a few other details, which make it look like a weapon used for construction.

This weapon shoots gray projectiles that are shot as single shots, but at a high fire rate. The grenades have looping shot, meaning that they are shot in an arc trajectory and have a certain bullet travel time. Moreover, the mines have contact detonators, which means that they explode on the impact of an opponent or if they last in a spot too long. It leaves a medium-sized explosion radius on the impact of an opponent.

When reloading, the player takes out the clip and replaces it with another. It has no delay mechanics.

For some reason, possibly due to a glitch, this weapon ejected shells, that was the size of some weapons' shells like the ones of the Automatic Peacemaker or the Mercenary. It was later fixed to no longer eject spent shells.

Its grade was reduced from Legendary to Rare. 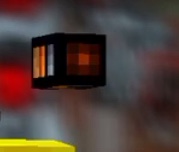