The Heavy Gifter is a Heavy weapon introduced in the 11.2.0 update.

It is a rocket launcher with a shape of the chimney that shoots explosive gifts. It has good damage, decent fire rate, low capacity, and low mobility.

The Heavy Gifter is a shoulder-held RPG-type weapon, which is chimney-shaped. There are three red stockings on each side, and a golden bell hanging from the bottom, attached by wrapped Christmas lights around the end of the barrel.

This weapon shoots explosive gifts that can come in different colored boxes and different colored wraps. These gifts perform best in close range, they have a medium bullet travel time and a splash radius on impact.

When reloading, the player opens the back of the chimney, inserts gifts, then closes the back. It has no delay mechanics.

Have a long-ranged weapon.

It was removed from the Armory. It has been disguised as an Apocalypse.

This weapon has been added back temporarily and is only available in Event Chests.

It is added back permanently in the Armory for 85 coins. 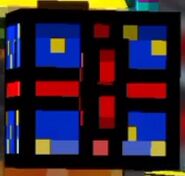