This article describes the Pixel Gun 3D weapon. If you're looking for the same weapon in Pixel Gun World, see Hellraiser (PGW).

6 (For unlocking the Gallery)

9 (For unlocking Clans and Black Market)

The Hellraiser is a Primary weapon added in the 8.2.1 update.

The Hellraiser is an automatic Halloween-themed assault rifle, akin to the Secret Forces Rifle. It has decent performance at max level. It deals decent to high amounts of damage, has a high fire rate, a decent capacity, and average mobility. It features full auto and 4x zoom.

It is based on the now-cancelled Heckler & Koch XM8, a U.S Army prototype assault rifle from the 2000s.

It has a yellow body and handle, a striped green birdcage-style muzzle suppressor, and 4x scope, with purple grip, cheek pad, and a rubber stopper on the bottom of the handle; it also has a red magazine and collapsible stock.

This weapon automatically shoots regular bullets with instant bullet travel time. This weapon has a medium range and its 4x scope allows long-range battles. The ammo that it starts out with is 35/70. Each ammo pack gives the player 35 ammo. Maxed out, it is 35/175, so the player gets 210 ammo. This gun is quite versatile as it is effective at any range, however, it still loses some accuracy when shooting at long distances, unless if the player uses the scope.

When reloading, the magazine from the bottom is ejected and replaced by another. It has no delay mechanics.

All maps except for Sniper Forts and Knife Party.

This gun works great on its own. However, its mobility isn't the best, so bring a weapon with high mobility to traverse the map easier.

The Hellraiser in use.

The 4X scope of the Hellraiser. 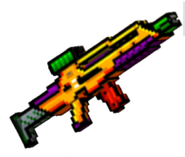