Can also be obtained through the Gallery with 500

The Heroic Epee, also commonly shortened to just Epee, is a Melee weapon introduced in the 17.1.0 update. It could be previously obtained from the Fairytale Season Battle Pass.

It is a fencing rapier that attacks players in close range. It has medium base damage combined with good super punch damage, a high attack speed of 89, and high mobility of 85.

It takes the appearance of a fencing sword and a bottle of poison.

The sword itself has a golden guard with a velvet red handle and a long thin blue/silver blade. The bottle of poison is green and has a white skull on all 4 sides. This weapon currently does not have any delay mechanics.

This weapon is a Melee weapon, so naturally, it can only attack players in close range when swung. Moreover, it can also poison them which deals damage to the afflicted over time. Finally, it has the Healing Area attribute, so that the user of this weapon can heal teammates and the user him/herself in a certain circle around the user, making it powerful for performing longer kill streaks. It heals 12 health/s while held.

It serves as a well-balanced melee weapon and can be used by all loadouts especially for 3-cat spam users.

This weapon is undoubtedly one of the most popular weapons in the game, due to its op stats (self-healing and super punch). Ever since its release in the Fairytale Season Battle Pass, people bought it to grind for this weapon. Due to how popular the weapon is, other players hate this weapon, possibly due to how overpowered it is. This weapon was also put up for voting in the Discord Server to be in one of the upcoming Trader's Van events.

Despite the category of this weapon, before 17.4.0, it had an area of effect, defeating the purpose of a Melee weapon in the first place. Because of the weapon's performance, it is banned from Knife Party, primarily for balancing purposes. The player going to Knife Party with a Heroic Epee will have the Combat Knife equipped instead, but they can feel free to change the Melee weapon in the Armory before starting or during the match.

Even though in the 17.4.0 update, the weapon's performance was completely modified, it is still banned from Knife Party due to the fact that it possesses unique attributes such as Healing and Super Punch.

The super punch effect of the Heroic Epee 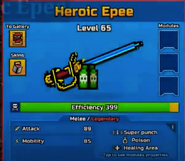 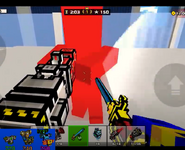