The Hitman Exoskeleton is a Backup weapon introduced in the 13.4.0 update. It is one of the four exoskeletons that can be obtained from the Scientific Lab Event.

It is a red exoskeleton with a pair of pistols that shoot regular bullets. This weapon has high damage, good mobility, and a decently high capacity for a backup weapon. It is typically a 6 bodyshot and a 4 headshot but this can vary with different modules, armor, and level.

They appear as a red exoskeleton with mechanical arms.

It has a grey main system unit, which connects the two giant red mechanical arms. The arms are red, with blue hydraulics and red hands with red fingers, and the words 'R' and 'L' corresponding to the right and left hands.

Each hand is carrying a giant silver pistol with a silver slide, a trigger for the exoskeleton to press that is silver, a black grip, and light blue illuminated iron sights. The right pistol has a yellow smiley face decal on the side of the slide while the left pistol has a red frowning face on the side. Both pistols have neon-blue front iron sights.

The user controls the exoskeleton via a black controller, with a white joypad and multicolored buttons.

The user will fire a single highly-explosive magnum round each from two large pistols, which may require the arms from the exoskeleton to operate such large handguns. The user will eventually notice a slowly increasing spread if the user continues to hold down the trigger until either stop firing or reloading both of the pistols.

When reloading, the arms of the exoskeleton will swap two depleted magazines normally like how the user reloads most of the dual handguns while the user slowly pushes the controller down.

Have a long range or scoped weapon to take out snipers. Higher mobility weapons for escaping enemy fire. A high fire rate or high capacity weapons could also aid you in medium ranged combat, not only in dealing extra damage but also serving as backups for when this gun does run out of ammo. Use weapons such as the Future Sniper Rifle, Hellraiser (PG3D) or the Vacuumizer as backups for when this weapon fails.

Using single shot high damage weapons such as Brutal Thinner, Destruction System or a charge shot weapon can deal most damage, then this weapon can finish them off very quickly. 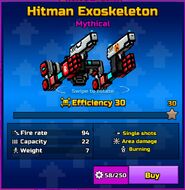