The Jetpack is a Tools Gadget introduced in the 9.0.0 update. It enables players to fly around anywhere inside the map for a limited amount of time.

The Jetpack is a jetpack depicted in most sci-fi movies, white a white coloring, with a black outline and a yellow warning symbol on the body of the Jetpack, some red and light blue stripes on the wings of the Jetpack, and black jet exhaust. On the back of the Jetpack, the word "FUEL" is written on it.

The Jetpack enables players to fly around using the Jump button once activated. Upon activation, the Jetpack starts to drain fuel for its duration, it can even drain more fuel once the Jump button (being a fly button) is used.

You need to hold the jump so it's hard to shoot for newer players. 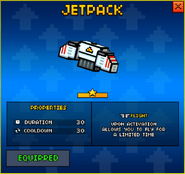 A player using a jetpack