This article describes a Pixel Gun 3D weapon. If you are looking for the same weapon in Pixel Gun World, see Cubacca's Crossbow.

The Laser Crossbow is a Sniper weapon added in the 10.2.0 update.

It is a futuristic crossbow that shoots piercing shots and that can be used in long range. It has good damage, a medium fire rate, a average capacity, and a slow mobility. This weapon is currently a 2 bodyshot and 1 headshot.

The Laser Crossbow is a golden crossbow with a wooden handle, silver nozzle and a blue tip in the middle of the nozzle.

It has a scope with a blue lens. Near the barrel are 3 rings, similar to the Prototype.

This weapon emits blue laser shots with a high bullet travel time and in which are harder to see for opponents, since the opponents cannot easily see the shots, unlike the Prototype and Anti-Champion Rifle among others. The shots have an instantaneous bullet travel time just like most snipers and can pierce shot through multiple players. It has an 8x scope which allows sniping and killing players in longer range.

When reloading, the magazine from the bottom is removed and is replaced by a spare one.

It gives a delay on some weapons that are associated with Three Category Spam like the Thunderer and the Reflector.

Have a good close range area damage weapon. This weapon can also be used as a 3 category spam sniper. Have a high mobility weapon with you to move fast while moving towards enemies.

At maximum efficiency (423,which means it needs to be mythical) with a maximized elemental module and the Halloween Mask, it does exactly 199% damage to the body. So, equip a weapon with a high fire rate, high capacity and low damage (like most Primary weapons, some Backup weapons and some Special weapons) to finish off the opponent.

The Laser Crossbow in use.

The 8X zoom of the Laser Crossbow. 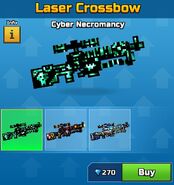 The old skin of the Cyber Necromancy.

The Laser from the Laser Crossbow.