The Leagues System was introduced in the 10.4.5 update. It consists of collecting trophies and receiving special prizes as rewards for placing high in leagues.

After various updates, the league system is now more of a bigger feature with more use rather than just a small feature for league-exclusive content.

It was removed in the 18.0.0 update and was replaced by the Trophy Road. However, this change has been reverted in the 18.1.0 update, with the return of this system along with the Tournament feature.

Trophies are a special type of item that can be rewarded from playing competitive modes. More trophies will make players reach higher leagues, and higher leagues will have better rewards, as well as unlocking some exclusive content. It also shows a player's success in the game, but often times isn't that reliable, since it is more about the amount of time invested per tournament rather than the player's actual skill level.

At the end of every multiplayer match the number of trophies that the user has increases, and the amount depends on your ranking within your team, being first in your team (or first in a free-for-all game) guarantees 40

. In the new trophy system, you won't lose trophies from defeat, and the only way to lose trophies is to leave a match that's in progress. Upon defeat, you will also gain trophies based on your rank within the team (or your rank in the whole game in free-for-all games), the lowest you can get is 5

from being ranked first in the losing team.

There are many ways for getting trophies quick.

Leagues are the progress of a player in the game. Higher leagues will unlock new stuff and exclusive content. They can be found in the "Leagues" tab (the 3rd tab) of the main menu. If a player has reached a league, on the process bar, it will say "Unlocked League". If the player has at least 3600

, on the process bar, it will say "You've reached a top league" on the Champion League screen. League list: 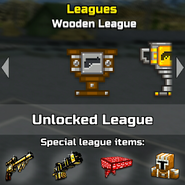 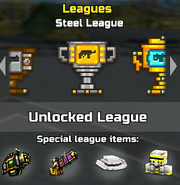 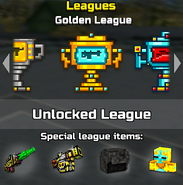 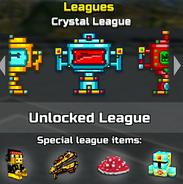 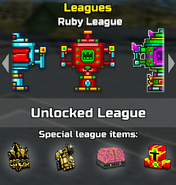 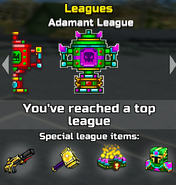 An extracted model of the Crystal League

Tournaments have up to 50 people in them, and you receive a rank based on your trophies. People with over the specified amount of trophies (equal to the base trophies of the next league) will be able to go up a league at the end of the tournament, and will be rewarded an egg, coins and gems. The quality of the egg and amount of coins and gems is based on your league. At Champion League, players will receive the special 'Champion Egg' and at Pro League, players will receive a 'Mythical Egg'.

Players below that number of trophies but above rank 30 will stay in the same league, and receive an egg, coins, and gems. The rewarded egg is the same as players who get promoted, but the amount of coins and gems is much lower. People who fail to rank above 30 will be demoted a league, and won't receive any rewards. The top three players in a tournament will also get a special event chest, in Pro League, if you surpass 8000 trophies, you can get an exclusive sniper, the Ultra Beam.

The player also unlocks exclusive hats and skins as rewards when they get to a new league, as well as other rewards such as

The league champion skins, like all other skins, cosmetically modify the texture of a player.

Here's a table of the leagues, trophies required and rewards.

The former Hats section in the Leagues section of the Armory, containing exclusive hats.

The former Skins section in the Leagues section of the Armory, containing exclusive skins.

In the 11.2.2 update, the Tournament system was introduced, and modified in a later update. Once a player has achieved 3000

, they are allowed to compete in tournaments (formerly). Now, the player has to reach a certain amount of league points to ascend in the next league tournament. For more information, see this article.

League Power, also known as "Power Bar", was the power of all the weapons combined. The higher the efficiency of weapons, the higher the league power.

As of the 12.5.3 update, this feature has been removed, due to general balancing changes.