The Lucky Chest was a feature added in the 10.2.0 update. The Lucky Chest gives the players access to a large variety of unique items and weapons. Some of them are obtainable exclusively by opening the Lucky Chest. However, it is now removed due to unpopularity.

The old appearance of the Lucky Chest.

Players were able to open it for free once every 4 hours or for an unlimited amount of times, but they will have to pay 3

There were 4 variants of chests in which each chest contains some items exclusively (although the difference in rewards between the chests isn't very significant): 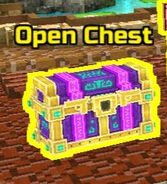 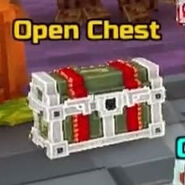 In the Lucky Chest, the available items were:

The Lucky Chest could have been opened for free every 4 hours. It was required to pay 3

to use the Lucky Chest when it cannot be opened for free. Moreover, this cost increases to 5

etc., but this will also slightly increase the rewards (for example, the player can only earn 1 part of the Sniper Shovel for free, but if they would want to earn 2 parts of that item or any other craftable item, they would have to spend 3

). You can watch a video advertisement and open it for free when it is not available.