This article describes a Pixel Gun 3D weapon. If you're looking for the same weapon in Pixel Gun World, see Lucky Strike (PGW).

The Lucky Strike is a Primary weapon added in the 9.3.1 St. Patrick's Day update. It has the same stats of Last Kiss and is merely a recolor of it.

It is a green rifle that shoots a group of green four-leaf clovers. It has a large fire rate for a shotgun, good capacity, and low mobility.

Due to the weapon being a recolor of its alternative, the gun resembles a rifle. It has a clover-shaped barrel hole and a shamrock and clover aiming sight. It is mostly light green, with a clover on the side of the gun and ammo box. The back handle is part of the shoulder rest. It also has a vertical foregrip on the front.

The player holds it with two hands. The shotgun shoots multiple bullets with a large spread in the form of four-leaf clovers, making this weapon perform best at close range.

When reloading, the player takes out the clip from the bottom and replaces it with a spare clip.

This can be used as an effective close-range weapon, equip a Sniper weapon such as the Prototype.

Initial release for Android users only.

It was removed from the game entirely. Even the previous owners of this weapon no longer have it with them. 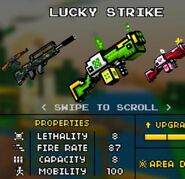 Lucky Strike in the shop.
Community content is available under CC-BY-SA unless otherwise noted.
Advertisement