89 (As displayed in the Armory)

The Mines Launcher is a weapon introduced in the 10.0.0 update. It can be found in the Heavy section of the Armory.

It is a gray launcher that shoots mines that detonate on contact. It has good damage, a very good rate of fire, good capacity, and average mobility.

It is an MGL (Multiple Grenade Launcher) with a black, white, and grey body with white and grey stock, white handle, grey and red cylinder loaded with time-detonated mines, black grip, and a grey and red barrel. It also has area damage.

This weapon shoots black and red projectiles that are shot as single shots, but at a high fire rate. The mines have looping shot, meaning that they are shot in an arc trajectory and have a certain bullet travel time. Moreover, the mines have contact detonators, which means that they explode on the impact of an opponent or if they last in a spot too long. It leaves a medium-sized explosion radius on the impact of an opponent.

When reloading, the player takes out the cylinder of mines and replaces it with another one. It has no delay mechanics.

Use a weapon or item with better mobility for easier traveling around maps.

The Mines Launcher in use. 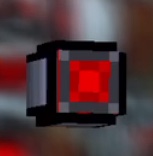