The Offensive Fireworks is a Heavy weapon introduced in the 17.2.0 update. It is obtained from the Oriental Season Battle Pass.

It is a battle pass exclusive weapon with a Lunar New Year fireworks themed weapon. It has a decently fast fire rate for a heavy, low capacity, and high mobility. It is usually a 2 shot at maximum level, and potentially a 1 shot with the triple shot and burning attribute.

It's theme is similar to that of the Temple Guardian, but instead of shooting (presumably) firecrackers, it shoots three fireworks, all in different directions. Under the base of the gun are fireworks, acting as the ammo.

Even without its enhancements, the Offensive fireworks deals an extreme amount of damage It is good on long medium and even close-range fights. It has big area damage which helps people killing multiple opponents. However, for a Heavy weapon, it has an average rate of fire and reloading time which is around 3 seconds.

When reloading, the clip on the under belly of the gun is taken out and replaced by another one.

It has Fixed Delay. This means that once the player switches from any weapon to this weapon, the Offensive Fireworks will always have a pull-up delay lasting around half of a second.

This weapon may have fixed delay, but is still very powerful when used on other players.

This weapon is great as long as you have another close range weapon like a fast-firing shotgun (Undertaker, Viking, or Heavy Shotgun.)

Pair with the Pulling Sucker Gun to allow you to have huge bursts of mobility and the ability to deal huge amounts of damage. 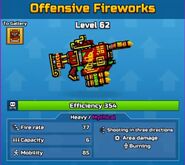 The Offensive Fireworks in the Armory.