If your looking for its Pixlgun 3D version, see the: Pixlgun. For it's Battle Pass counterpart, see the Super Pixel Gun.

The Pixel Gun or simply the Pistol is a Backup weapon that can be used in all modes except for weapon specific maps and modes in Pixel Gun 3D. It is one of the seven default weapons in the player's loadout along with the Shotgun, Combat Knife, Sniper Rifle, Flamethrower, Signal Pistol, and Machine Gun.

The Pixel Gun is a medium sized chrome pistol. Compared to most backup weapons, it can be easily dismissed at higher levels. It possesses low efficiency, has a normal fire rate, a mediocre capacity, and average mobility. It does not have upgrades available.

The Pixel Gun is a small pistol with a leather handle, accompanied by a tiny trigger. The silver of the gun itself is a big metal barrel. It is actually quite detailed, considering the first gun in the game the player gets.

In combat, the Pixel Gun fires a single bullet that deals a small amount of damage to beginner players (or players in Deadly Games), but it quickly loses its effectiveness at higher levels. Meaning the Pixel Gun needs to be replaced by a more effective backup weapon later on. Its rate of fire is somewhat average and its accuracy is enough to chain hits and make headshots.

Its mobility is mostly average compared to most beginner weapons, its not slow nor fast. Its capacity can be a little problem as it is a little shorter than most pistols, but it has a very fast reload time, possibly the fastest reload time in the backup weapon or rather, every weapon in the game.

Normally, use weapons from other categories (such as the Machine Gun) and use this if you run out of ammo from the current magazine. It also can be used as a short-ranged rapid fire backup weapon in Sniper Forts.

The Pixel Gun is added in the game.

Redesigned its appearance, possibly updated its armory sprite. Its old design can be seen in some material and its kill icon.

Updated firing and reload audio along with the Pixlgun, to make it more realistic.

Reverted firing audio along with the Pixlgun, possibly for its iconic firing sound.

Given a new armory icon and a new skin aswell. 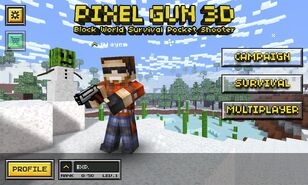 The Pixel Gun wielded in the old main menu. 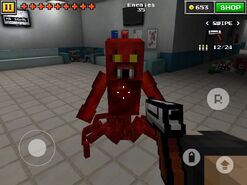 Pixel Gun in use. 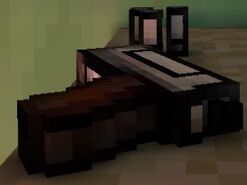 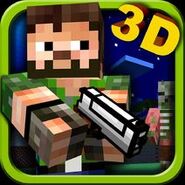 The Pixel Gun wielded in the old game icon. 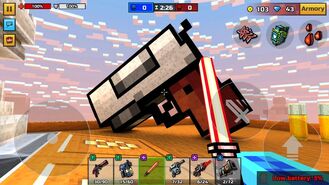 The giant replica in Checkmate. 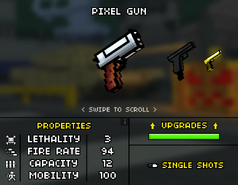