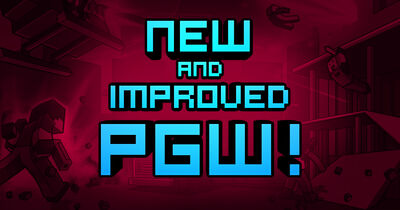 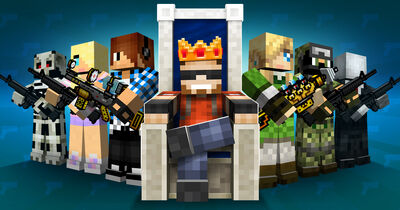 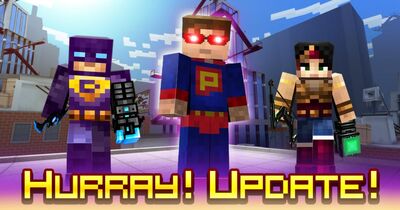 Superheroes have arrived in Pixel Gun World! As well as their skins and powerful weapons! 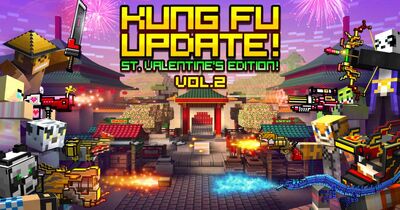 They can teach all the subtleties of eastern martial arts to anyone. And all the Pixel Fighters have a competitive edge – a wide range of kung fu weapons. Get armed and off we go!

PGW is growing and developing, as well as the clans are.

From this moment on you are able to create 50 clans more. It means that in clan wars for survival as many as 150 clans are taking part! Only the best of the best will get its niche in the temple of fame: now in Top Clans window you will be able to see only the first 100 clans with the highest score. The rest 50 ones can be found by searching.

You will find all this and even more in current update!

Dash into Pixel Gun World and try all the novelties yourselves!

Since this moment the Clans are launched in PGW!

Each clan can consists of only 10 players - members of the clan.

The clan's leader aka clan's creator is able to invite and expel players from his/her clan.

If you would like to join already existing clan - just apply for the clan that you like most.

The clans’ mailbox was created especially for your convenience. This is the place where you can check the status of your application: whether your request was accepted or not; the clan leader is able to handle incoming messages here.

All clans will fight for weekly clans rating. From now on, each clan's member fights not only for himself but for his/her clan as well.

Now you score points are not only for yourself but also for the whole clan.

And also, Clans’ War has started. The number of Clans in game is limited during Clans’ War. More details here.

It allows you to find out head-on who's stronger - you or your opponent.

You will face a random opponent, by choosing this mode and entering the battle.

And you have only 3 minutes  to prove you’re stronger.

Don’t waste even a second! Battle!

Armor capacity has been improved.

Now, the armor protects a player in the same way as in reality - it minimizes but not excludes the damage. The damage depends on the quality and the type of armor. These new features make the game more realistic and dynamic.

Explosion damage has been improved.

The maximum possible level for a player has been increased to the 20th level.

The possibility of upgrading of few selected weapons:

Each of these previously purchased weapons will be automatically upgraded to UP2!

Space Desert - the sandy planet somewhere far, far away, spotted with lots of cunning energy fields and narrow tunnels all over its surface.

Coliseum - this mini map is an ideal place for Death Matches and Duels.