Discovering how his world was ruined, and how he wants to save it.

Pixel Man (also referred to as "Newbie") is the player character and main protagonist in Campaign mode. He is also the mascot of the game Pixel Gun 3D itself.

Our beloved Pixel Man also known as Newbie is the iconic mascot of Pixel Gun 3D and is constantly well-known as the starter character. Nearly every beginner player is automatically generated with the Newbie skin, therefore giving Pixel Man a sense of immaturity and that's what makes him so whimsical. As seen in Campaign, Newbie ventures throughout the endless worlds.

Pixel Man starts out sleeping in the outskirts of San Blocksisco on his farm when suddenly an outbreak of zombies and monstrous creatures started to infect most of the city's citizens.

After the latter, he travels with the schoolgirl to the Crossed Worlds, where he fought through a variation of enemies and then finds The Creator, leading to a fight against the bug that ruined his world which was born from the Creator's game programming error. He eventually succeeds, but out of anger, The Bug turns him into a bug himself. He then gets exiled into the Internet.

After being stuck in the internet for 3 years, he was picked up by a group of rebels who asked him to help them recruit "The Champions", who are the most powerful players in games that are created by a villain called "Cubic". After recruiting all 3 of them, they traveled to the Citadel which they were blocked by Cubic's henchman named "Admin" who took the appearance of a green version of Pixel Man. After defeating Admin and his clones, Pixel Man storms into Cubic's Citadel and defeated him, only to find out it was a trap and Cubic send him back to the start, Pixel Man is now trying to figure out how to break this loop Cubic has made.

As seen in his detailed comic-strip representation, Classic Newbie is a blocky character dressed in a crimson shirt with a mahogany bandoleer strapped across his torso joined with navy blue trousers. On his face, Pixel Man has a determined expression and is accompanied with a scarlet headband. He has light-brown hair, sideburns, and a very short, trimmed beard on his chin. He holds the classic Pixel Gun as depicted in his Pre-12.2.0 Snapshot and wears black, finger-less gloves.

Pixel Man is a middle-aged man with brown hair, a brown beard, a red shirt, navy blue pants, and has a brown holster for his Pixel Gun on the side. He is sometimes seen with a red headband with a pixel of hair covering it. 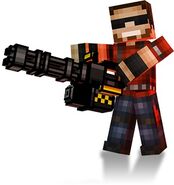 The old "Newbie" skin with the Automatic Peacemaker M2. 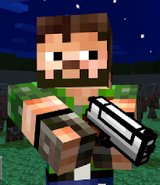