The Plasmatic Digger is a Primary weapon introduced in the 21.3.0 update.

It is a mining/futuristic themed Primary weapon. It can be obtainable by completing all the 6 mining challenges of the Mining Season Battle Pass. It deals good damage, paired with a high fire rate, low mobility and average capacity.

A red generator is strapped to the player's back which fires blue plasma bullets, with a grey and blue belt running from the generator to the device held in the player's hand. The weapon has a flashlight on the side and three red and silver barrels that fire the projectiles. The barrel looks like Plasma Minigun.

This weapon has a short fixed delay, and the minigun

Attribute. It deals above average damage, being a 15-20 shots to the body. Thanks to the burning

, the bullets are still damaging the opponents after a hit. In addition, it possesses the ability to restore ammunition over time

which restores 2 bullets per second. When reloading, the player takes the blue-gray belt and shakes it, and then the player puts it back in the barrel.

This weapon has Fixed Delay, meaning that it will have a short pull-out animation, lasting about 1/2 a second every time this is equipped by switching from any other weapon.

The Plasmatic Digger in the battle pass intro 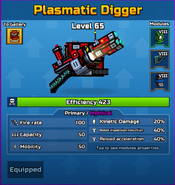