The Primal Cold is a Melee weapon introduced in the 17.8.0 update. It is part of the Titanic Lottery.

It is a black axe with a large ice blade forming the head of the axe. It is a melee weapon with the ability to slow down enemies and has the Super Punch with Area Damage. It has a good fire rate, good mobility, and capable of a 2 shot kill.

It is a Titanic-themed axe with a white blade that looks like it is broken up to different pieces. It has a black handle with blue pieces where it connects to the blade and blue vine looking things on where the player holds it. It also emits snowflakes after every swing.

This Melee has a Super Punch that is activated every 2 hits when it is activated, the blade of the axe starts to grow ice spikes around it which looks similar to the ones on the Ice Club and the weapon emits a frosty aura around yourself, this aura looks similar to the Snow Queen Wand's attacking effect. The Super Punch effect will summon large ice spikes and cause Area Damage in front of its user with a cone shape, damaging any enemies inside it, similar to Spirit Staff. The weapon can also inflict Slow effect on enemies which makes them easier to hit and stopping them from running away. When the Super Punch effect is activated, the weapon is capable of killing players with only 1 hit.

It has Fixed Delay. This means that once the player switches from any weapon to this weapon, the Primal Cold will always have a pull-up delay lasting around half of a second.

Have a weapon with a longer range like a Sniper if engaged in long-ranged combat.

The Primal Cold in the Gallery.

The Primal Cold in use. 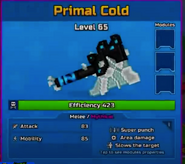