Vaulted at the moment

The Razor Thrower is a Special weapon introduced in the 5.5.0 update.

As its name implies, it's an orange weapon that fires razor-sharp discs. The weapon is pretty powerful, as it can kill unarmored players in 2 shots. The weapon has a decent fire rate, moderate capacity, and decent mobility.

It has an orange base/handle that resembles a carnivorous reptile's mouth (most likely a crocodile, alligator, or a raptor-like dinosaur), with a buzzsaw blade in the middle.

When the fire button is pressed, the weapon will fire a disc that will pierce through enemies, inflicting the bleeding effect.

When reloading, the large clip of razors in the middle of the weapon will be taken out and be replaced with a spare magazine.

Combine the weapon with a weapon with good mobility to easily maneuver around the map and a long-range weapon to easily deal with some snipers. Bring a reliable Primary in case you get stuck in sticky situations.

The original form of the Razor Thrower. It was replaced by the current Razor Thrower in the 8.3.0 update. It appeared as a regular and yellow razor thrower.

The Angry Reptile, which was the upgrade of the Razor Thrower. It was replaced by the current Razor Thrower in the 8.3.0 update. It appeared to the form of a green alligator with a circular razor in its mouth. 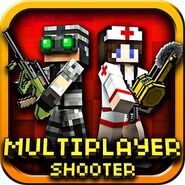 The older Razor Thrower in the 5.5.0 update icon.