The Ritual Rifle is a Primary weapon introduced in the 21.3.0 update and is obtainable in the Trader's Van.

The Ritual Rifle is a Prehistoric-themed Mythical weapon of the Primary category introduced in the 21.3.0 Chosen by the Crystal Trader's Van. It deals above average damage, paired with a fast fire rate, moderate capacity and mobility, plus bullet travel time.

The Ritual Rifle takes the appearance of a prehistoric-themed assault rifle. A dinosaur fossil is mounted above the weapon and several neon green crystals are embedded throughout the gun with the largest one attached to the front of the weapon. A green magazine is placed on the base of the Primary and its wooden handle appears dark velvet.

When the fire button is held, the gun emits neon green bullets out of its crystal similar to the Portalium Rifle with travel time. When an enemy comes in contact with them, they will be damaged and slowed down (

). In addition, these bullets also ricochet (

) off surfaces. When its 30 bullet magazine depletes, the player ejects the magazine out and inserts a fresh one, with the reload lasting around one second. The weapon deals high damage per bullet. Reload time takes, however, longer than average.

This weapon has Fixed Delay, meaning that every time it is switched to, it will have a short pull-out animation lasting around half a second.

Pairing this with a high damaging Sniper for longer ranges and a Area Damage Heavy weapon is recommended for better gameplay. 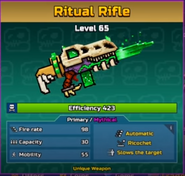 The Ritual Rifle in game